After the dust settled and the outdoor stages were torn down from the Sonar (venue in Baltimore, MD), the the 9th annual Maryland Deathfest (a festival dedicated to “extreme” music, focusing primarily on death metal, but not being shy of other forms, and some hardcore for good measure) officially came to a close. This was the first time that I attended the Death Fest (along with my two brothers, of which the founder of this blog is amongst, Wystan Frauka), though seeing as I am currently living within walking distance of the Sonar, it seemed like I had to attend, especially with Kylesa, Savannah’s sludge metal masters, on the roster. I will try to keep this short and just touch on some of the highlights from the three days I was able to attend (sadly I did not get to see Dixie in Buzzov-en on Thurs). 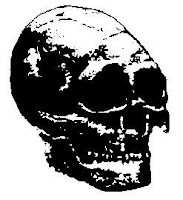 The Skull
Bastard Noise:
I have only very recently learned about the powerviolence band Man is the Bastard, and its evolution into a noise band, the Bastard Noise, and as such I was only able to listen to a few of their albums very briefly before the fest. If I was not sold on them before, I certainly am now (another servant of the skull perhaps?). Although I knew Bastard Noise was a very bass heavy band, having listened to their newest LP Culture of Monsters, I was pretty shocked to see that only two of the three band members actually had traditional instruments, founder Eric Wood on bass, and another on drums. The third member, Aimee Artz, seemed rather out of place, next to the much older, beer-bellied Wood. She did a have a black polo sporting the skull logo of Man is the Bastard/Bastard Noise, so it was clear she played some part in eccentric band. When they started, it quickly became clear that the vocals that I had assumed were Wood’s from listening the new album were actually primarily Aimee’s. Saying it was an odd combination does not begin to cover it, but this juxtaposition made it all the more enticing. When she was not singing, she went over to this soundboard-like contraption that I have since learned is called “the coil.” Quite what it was doing to the music I am not certain, however. Aimee’s hateful screams mixed with the low bellowing of Wood and all crashed into the intricate bass lines that Wood produced at a lightening pace, further complimented by waves of chaotic drumming, made for quite the experience. And although the voices were often difficult to make out, it was hard to miss when they started “Me and Hitler.” It was arguably the most memorable song I heard the entire weekend. 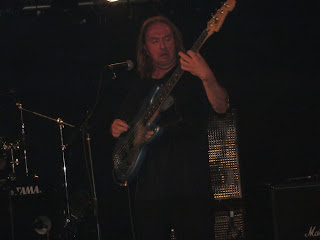 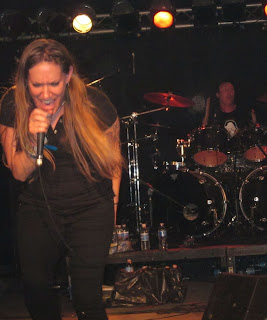 Ghost:
I would be lying if I said that I was not looking forward to Ghost’s performance, the final performance of the festival. If you are unfamiliar with them, they are a black metal band from that dons robes and cowl their faces before their performances. Not to be outdone, the singer dresses up as a satanic cardinal with his face painted in the visage of a skull. But all of this seems a bit pedestrian when compared to their most distinguishing feature, the clearly pop inspired vocals. Nowhere is there a growl or scream, instead this is replaced by a rather cheerfully singing. The dichotomy is complete when you add their lyrics detailing witches’ Sabbaths and bloody rituals. They played their songs well, easily creating a grim and foreboding atmosphere. This was accentuated by how many people were packed into the warehouse space. It was a sea of bodies ebbing a flowing to the music, impossible to stem. I can’t help but feel this mood was deconstructed a little by the some the people there that were taking it a bit too seriously. One such person, who I will call “Invisible Oranges,” for his tendency to keep both of his arms raised and his hands clawing skyward, appeared as though he was having a religious experience. He had a way of keeping his fat arms in front of anyone around him, myself included. The only way I was able to prevent from becoming too frustrated with him, was to imagine those oranges he should have been cupping in those outstretched hands. Luckily, after a few songs I was swept away from in the surging tide. With only one album, Opus Eponymous, they only played for about an hour, covering most of their material, before leaving the stage as taciturn as they had mounted it. It was a nice way to end a rather chaotic festival, without a word.
Posted by Eric Wier at 10:48 PM