This week saw the passing of Jason Molina, one of the unsung heroes of the alternative country movement.

Jason was a incredibly prolific song writer, releasing music under the banner of Songs: Ohia and Magnolia Electric Company. Since his Songs: Ohia debut in 1996, he had released at least one album every year until 2008. After releasing Josephine in 2009, Jason fell away from the music scene to battle with alcoholism. And it was his addiction to alcohol that ended up doing him in, as he died from organ failure due to alcohol consumption.

One of the things that always drew me to alternative country was its prevalence of sorrowful songs, and Jason was a master of this. And unfortunately, this was undoubtedly a consequence of his personal struggles with depression and alcoholism.

It was hard to pick an individual song of Jason’s to highlight in this Song of the Week post. But in the end, I decided on a song from Joesphine. I can’t help but think that Jason was talking about himself when he sang the line: "So all of you folks in heaven not too busy ringing the bell, some of us down here ain't doing very well."

We will miss you Jason. Thanks for leaving us with so much wonderful music.
Posted by Gregory Wier at 10:43 AM No comments:

Help Support Two Cow Garage! The Death of the Self Preservation Society

I had just graduated from college and I was going to start graduate school come the fall, but not without a great deal of trepidation. My college friends and I were all going our own separate ways. A girl that I was interested in was going to be pursuing further education overseas, such that I probably wouldn’t be seeing her again. I was too timid to say anything. There were a few months of summer left before I was moving to Pittsburgh for graduate school, and I was occupying my time working at a tree farm, pruning and watering fields of pine trees for 9 hours a day. It was in that state of mind that I first heard the song “Brand New July” by Two Cow Garage (on the 1st day of July, if you believe it).

“And I’ll never forget the sweet summer sweat and the feel of a brand new July. To hell with regrets and words never said. I’m leaving them there to die.”

The song, and those lines in particular, struck a chord with me during that confused time in my life, as I sweated outside in the hot sun at the tree farm each day. “Brand New July,” and the whole album it was from (their sophomore release, The Wall Against Our Back), really helped give me confidence to make my way through that uncertain time of my life. Vocalist/guitarist Micah Schnabel was right, to hell with regrets. There was no sense it getting caught up in my own drama and bringing myself down.

“Brand New July” was not my first exposure to Two Cow Garage. I had been listening to the Columbus, Ohio-based rock band during my last 2 years or so of college, rocking to their aptly titled 3rd album, Three, and the subsequent Speaking in Cursive. I loved the lyrical depth of their songs, all of which are rife with authenticity. Their songs speak of the trials and tribulations of life, all rooted in struggles each of the band members actually faced. And since they are the product of real hardships, not unlike the ones we all have been through, it is not hard to become invested in the songs. Even if the situations are different from what you have been through, when you hear the pain and frustration in Micah’s or Shane’s voice you know it is genuine (Shane Sweeney is their bassist, and 2nd songwriter). At the time, I was pretty convinced that there was not a better old fashioned rock and roll band playing in America, and having seen them play live numerous times since, I can safely confirm that is the case. On stage they tear into each song with reckless abandon, all tied together with the thunderous drum performance of David Murphy (giving any heavy metal drummer a run for their money).

This has been a long winded approach to say that the world needs more music from Two Cow Garage, and now we all have a chance to help the band release their next record. It has been awhile since Two Cow Garage’s last proper studio album, 2010’s Sweet Saint Me (though both Micah and Shane released excellent solo albums in 2011). Two Cow Garage has just finished recording their next album, The Death of the Self Preservation Society, and are ready to master the album and press it to cd. However, doing that costs a lot of money, and unfortunately they do not have the support of a record label to help with those expenses. How it has come to pass that no record label is willing to sign them, I don’t know, particularly after releasing 5 stellar albums and touring relentlessly. They have set up an Indiegogo campaign to help raise money to release the album, which can be found here.

At the time of writing this, they have already surpassed their $12,000 goal, but any additional money will be used to help reissue their old albums (most of which have been out of print for awhile). That way, great records like The Wall Against Our Back will be available for purchase again, where hopefully they can mean as much to others as they have to me (the band recently repressed the album to vinyl, and should still have some copies available. So, if you have a record player, you really should consider buying it).

Support their Indiegogo campaign here.
Buy The Wall Against Our Back.
Posted by Gregory Wier at 11:48 AM 1 comment:

Email ThisBlogThis!Share to TwitterShare to FacebookShare to Pinterest
Labels: Micah Schnabel, Rock, Shane Sweeney, The Wall Against Our Back, Two Cow Garage

Song of the Week:

Clutch is a band that has been on my radar for quite a while. They have been playing blues-inspired hard rock since 1990, and impressively have maintained the same line-up since their inception. Admittedly, the impetus to finally get me to listen to them was hearing that they would be headlining a tour with Orange Goblin (a UK-based metal band).

I bought their self-titled 2nd album, as I had heard it was amongst their best (out of soon to be 10 studio albums). “Texan Book of the Dead” is the 4th track from that album. Almost immediately, I was reminded of the groove-laden stoner rock of Kyuss. Vocalist Neil Fallon has a bluesy sort of bark that is instantly recognizable. Lyrically, Fallon can be pretty witty and a lot of the songs are fairly comical (even if some of the lyrics can come across as a little childish at times). It is pretty apparent that Clutch does not take themselves overly seriously, and that is a good thing (it is hard not to get behind a song titled: “The House That Peterbilt”). They are a band interested in having a good time and keeping the “rock” in rock and roll.

Clutch just started their US tour with Orange Goblin last Friday. Get out there and see them! The tour dates can be found here.
Posted by Gregory Wier at 2:04 PM No comments: 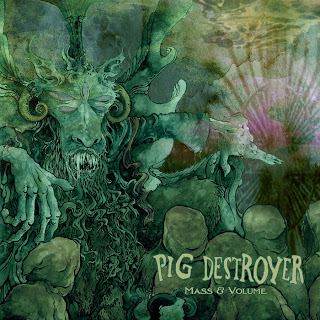 Song of the Week: Trilobite - Catalyst

Trilobite is an instrumental sludge metal band from Florida, and “Catalyst” is the opening track from their debut EP Delusions of Grandeur.

Read more »
Posted by Gregory Wier at 4:45 PM No comments: