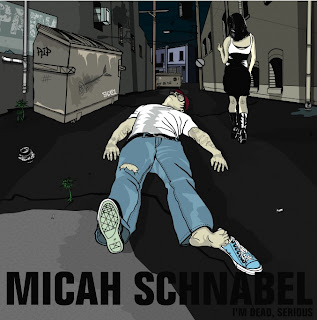 
“I’m Dead, Serious” is Micah’s 2nd solo effort, and the follow up to “When The Stage Lights Go Dim,” which was my favorite album of 2009. For awhile it looked as if “I’m Dead, Serious” was going to come out in early 2012, but much to my excitement Suburban Home Records decided to start selling the album just 2 weeks before Christmas. And what a way to wrap up a year of quality music! I have always been amazed by Micah’s ability to continually put out great records (Two Cow Garage or otherwise). In a time when I am often just hoping for something that is not terrible from long-running bands that I love (Gin Blossoms, Drive-By Truckers), it is great to have a band/songwriter that I do not have to worry about.

“I’m Dead, Serious” finds Micah singing about failed relationships and the struggles of being a touring musician, topics which anyone who has heard his prior work will be acquainted with. And while continuing to tread familiar ground can often be construed as a bad thing, one would be hard pressed to complain when Micah’s songs continue to brim with sincerity. It is very apparent that Micah has lived what he sings about on “I’m Dead, Serious,” and it is that sense of genuineness makes the songs all the stronger. Furthermore, Micah continues to display himself as a gifted lyricist, making it a rewarding experience to pore over each of the songs, deciphering every line. In Zen and the Art of [fucking up your life], he brings up his musical influences in a deft and natural way that I can’t help but smile at: “I remember talking Dylan, and a fist across my jaw. Said I always preferred Pavement, but not to break my fall.”

Soundwise, “I’m Dead, Serious” is a considerable departure from his first solo album, which was largely an acoustic album. Micah has opted for a full band treatment for quite a few of the songs on “I’m Dead, Serious,” and has managed to craft some of the catchiest and most upbeat songs he has ever written. More to that point, the cheerful tone of the music is quite at odds with the dark and upsetting subject matter behind the songs. As such, you can put on the album and not have your mood dampened, rather it will probably brighten it.

You owe it to yourself to give “I’m Dead, Serious” a listen, as it is one of the best releases to come out of 2011. Currently, the album is available on Cd from Suburban Home Records. While none of the album’s tracks are on youtube at the moment, I will leave you with an early version of Confessional, which makes an appearance on the album (it has been a favorite of mine for awhile, so I am glad it was finally recorded):