Midway into 2014, it might seem like something of a joke to be posting a list of my favorite albums of 2012. It has been something that I have been mulling over for awhile, and have continually struggled to get anything written down about. 2012 was a very unproductive year for me writing about music (only 6 blog posts for the whole year), but there certainly was not a dearth of quality music released. On the contrary, there were a lot of excellent albums which deserve to be talked about.
So without further ado, here my favorite albums of 2012:

01. The Menzingers – On the Impossible Past
Of all the albums that I listened to in 2012, the Menzinger’s On the Impossible Past was the one that I spent the most time with. My first experience with the band was at a Bouncing Souls show, where they served as one of the openers. The energy and enthusiasm they brought to the show was contagious, prompting me to go home after the show and look into buying their albums straight away. The Menzingers deftly combine elements of a host of beloved punk rock bands, but still manage to maintain their own identity..They have the upbeat cynicism of Alkaline Trio, the anthematic sing-alongs of the Bouncing Souls and Against Me!, and the immersive story-telling of The Hold Steady (not so much a punk band, admittedly).

While the songs on On the Impossible Past lack some of the aggression that marked their previous two albums, the song-writing is just as strong. Greg Barnett and Tom May share the vocal and songwriting duties on the album, though Barnett’s songs have the most emotional punch, often nostalgic glimpses into past relationships. Such topics can be prone to sounding cliched, but they never succumb to that, each injected with enough personal detail to confirm that they came from a legitimate place. And while Greg and Tom are clearly singing about their own struggles, they are ones that are very relatable, even if the specific details are different. I was going through something of a rough time during the summer of 2012 when I first discovered the album, and the songs really struck a chord with me.

Two years after its release, I still frequently come back to On the Impossible Past. All the songs transport me back to those times quite vividly. I am no longer having as much of a “horrible time” and I am not making “long drives back to Philly,” but the album will certainly make sure I never forget when I was.

02. Unsane – Wreck
In the past 3 years I have come to listen to a lot of metal, almost to the exclusion of other genres. And while Unsane’s Wreck is probably on the radar of many long time metal fans, it is not really metal. It is noisy aggressive rock. My original interest in harsher sounding music came from listening to the noise rock of The Jesus Lizard and Big Black, and It was refreshing to find an album that brought me back to that sound. Unsane is anything but a new band, however, having  been releasing their own form of sonic misanthropy since their inception in 1988.

The songs on Wreck are built on a foundation of driving, distorted basslines and staccato drum beats all tied together with Chris Spencer’s bluesy guitar lines and anguished yells. While most of Spencer’s vocal work consists of him shouting at the top of his lungs, there is a lot of emotion housed in those agonized yelps. More than just anger, there is a substantial dose of sadness and regret conveyed in his delivery. The bloodied hand pictured on the album cover of Wreck might give off something of a wrong impression of what to expect from the album. This is not an album with heavy-handed songs about excessive violence, it is something far more serious. The songs on Wreck are about the hardships of day-to-day life: the pain of failed/failing relationships, struggles with anxiety and depression, and strained friendships. The music is undoubtedly aggressive, but it is not just aggression for aggression’s sake, and as such it packs much more weight.

I had the pleasure of seeing them play at 2012’s Maryland Deathfest, and I have to say their performance was probably my favorite of the weekend (over some notable heavyweights: Electric Wizard, Godflesh, and Napalm Death).  They played a lot of their new songs, capturing the same slow boiling anger and rage.  Interspersed through the new material they played a variety of older songs not all of which I was familiar with, but they were immediately likable (not something I would say about most of the bands playing at Deathfest, he he), making you want to throw your fist into the air and scream.

03. Cory Branan – Mutt
I first discovered the singer/songwriter Cory Branan in 2009 from a split 12” that he did with Jon Snodgrass. And even with my unabashed love for Snodgrass, it was Branan’s songs that struck me the most on that split. The amount of wit and humor that permeated songs like “Walkaround” made me a fan after a single listen. And it seems that I was not the only one to have realized Branan’s charm, as shortly thereafter I realized that Ben Nichols even mentioned him in the Lucero song “Tears Don’t Matter Much.”
“Cory Branan’s got an evil streak. And a way with words that’ll bring you to your knees.”
The split with Snodgrass really whetted my appetite for some new material from Branan (which I kept at bay by checking out his back catalogue; the newest being 2006’s full length 12 Songs). And after 6 years of keeping his fans waiting, Branan finally released a new full length, entitled Mutt. It is a fairly apt title, as the album does not stick to one single style, jumping from mournful country ballads to Tom Waits-inspired jazzy romps. Aside from the song “Survivor Blues,” the album does not have as many fast and hard rocking tracks as the Snodgrass split, but that is not to suggest that the album is any less enjoyable. First and foremost, Branan is a storyteller and that is evident on every track on the album, each brimming with sarcasm, sorrow, and spirit.

I feel that anyone that has seen Branan perform live would tell you that is the best way to experience his music. It is amazing that he does not destroy his acoustic guitar every night with the amount of energy he puts into the songs, beating the hell out of his poor instrument.  Even if you don’t have the chance to catch one of his shows, Mutt is an excellent survey of Branan’s talents.

2012 was the year that I came to love traditional doom metal. I truly came to appreciate sludge metal the year before and that helped me venture further into the realm of doom metal, sludge metal’s older cousin. Indeed, the two genres often blend together, with their penchants for slow tempos and heavily down-tuned guitars. 2011 was my introduction, with great albums by Ice Dragon and The Gates of Slumber. Right out of the year’s  gates (excuse the pun), both Pilgrim and Pallbearer released excellent traditional doom metal albums. Both those albums received widespread critical acclaim upon release, though if I had to choose a favorite between the two, I would have to say Pilgrim’s Misery Wizard.

By just looking at the tracklist and runtime of Misery Wizard (6 songs in 55 minutes), you can get a good idea of what you are in for: titanic guitar riffs, slowed down to the pace of molasses. It is evident that Pilgrim hold a great deal of reverence towards the classics of the doom metal genre (Black Sabbath, St. Vitus, Pentagram), despite none of Pilgrim’s members having been alive when those bands were in their prime. Pilgrim is not a band for the faint of heart. Their guitar riffs drag on at a ponderous rate, though they are surprisingly catchy and enchanting, with the repeated tones doing an excellent job of conjuring up images of the Frank Frazetta-inspired fantasy which the band clearly embraces.

The opening track, “Astaroth” is characterized by an agonizingly slow guitar riff, plodding along for almost three minutes before there are any vocals, arriving in the form a Gregorian-esque chant that suit the funeral dirge of the music perfectly. Four minutes into the track, the lead vocals come in, delivered by The Wizard (vocals and guitar) in a suitable baritone complementing the monolithic guitar riffs. The majority of the tracks on the album never rise above the glacial pace of the opening track, though the song “Quest,” documenting an adventurer voyaging into an ancient tomb and battling it’s keeper, breaks mold with an invigorating and up-tempo guitar solo. This brief change in pace offers a hint of variety to the largely morose nature of the album, making it all the more memorable. While Pilgrim and the brand of music they play are certainly not for everyone, those for a penchant for despondent music should check it out, turn up the volume and get lost in the riffs. 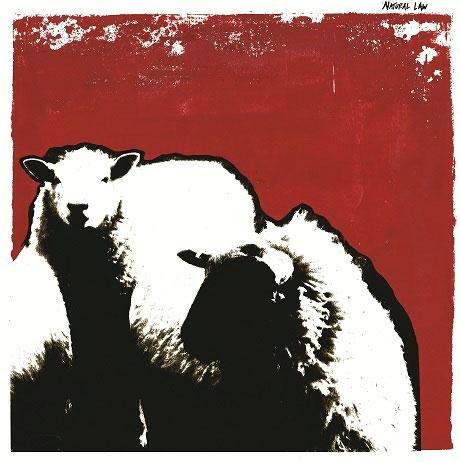 This album may have been intended to be released at the end of 2011 (when it was recorded), but it was only available for purchase at the beginning of 2012. I have fond memories of driving 4 hours to Pittsburgh only two days after Christmas to see Natural Law play. They were embarking on a short tour to celebrate the completion of Find the Flock, but despite their best efforts, were not able to have the record available for the shows (though they put a mediafire link up online so fans could download and hear the music beforehand).  Beyond Natural Law, the show was with CREEM and Hounds of Hate. Natural Law’s drummer (Jay Wiggin) played drums in all of the bands, which was quite a feat considering the frantic pace of the songs.

With 10 songs in under 14 minutes, Find the Flock wastes no time, pounding through catchy songs that call to mind classic DC hardcore like Minor Threat and Faith. A lot of the hardcore punk that I listened to in 2012 was of the more aggressive and vicious sort, such it was nice to find something that harkened back to the roots of the genre. There is not too much information about the album available online, but it was released on Colman Durkee’s (Natural Law’s guitarist) label, Katorga Works, and is still up for download from his personal blog (the excellent icoulddietomorrow). It also appears to still be available for purchase from Deranged Records.

Unfortunately, Natural Law is no longer together as a band, but Jay is still active in Hounds of Hate. Doubtlessly, most of the other members are active in other bands currently, but again, information is scarce.
Posted by Gregory Wier at 12:09 AM