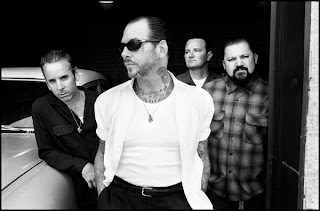 Up until recently, Pittsburgh did not have many venues suitable for accommodating more mainstream acts and the larger crowds that they draw. That changed with the construction of Stage AE, an outdoor amphitheatre situated right across from the Steelers’ own Heinz Field. I had not been to the venue before, but I decided that I would be foolish to pass up the opportunity to see Social Distortion, especially with the venerable Chuck Ragan opening for them.

Social Distortion is a Californian punk rock band that has been putting out music since the late 1970s, albeit at an extremely slow pace. Indeed, it took eight years for them to produce a follow up to 2004’s Sex, Love, and Rock’n’ Roll. With each new release, the band has managed to inject more country and blues stylings to their sound, a fact that is especially evident on their most recent offering, 2011’s Hard Times and Nursery Rhymes. Admittedly, I have not spent too much time with the album, though after a couple precursory listens, I couldn’t help but walk away with a bad taste in my mouth. If one could ever have classified vocalist/chief song-writer Mike Ness as a clever lyricist, it is safe to say he has forsaken that mantle (even the song titles offer up clues to their banality: “Diamond in the Rough” and “Can’t take it with you”). Despite clichéd lyrics, most of the songs are catchy and enjoyable, though a few feature gospel singers as back up vocalists that make me cringe each time I hear them. Being that the current tour is in support their new album, I was fairly certain that their set list would be largely dominated by new songs. Even still, I was excited to see them, as I have many fond memories of listening to their prior offering, Sex, Love, and Rock’n’ Roll, while I was in college.

As I suspected, their set was highly skewed towards material from Hard Times and Nursery Rhymes, though they played many of the notable tracks from each of their earlier albums (including crowd favorites “Story of my life” and “Ball and chain”). Unfortunately, they only played a single song from Sex, Love, and Rock’n’ Roll. Mike Ness was constantly talking to the crowd between songs, informing us that with Stage AE’s construction, they finally had a place to play in Pittsburgh (which was hard not to be a little disappointed hearing, as I suppose they are now too “big” to be playing in the smaller and more intimate venues, of which Pittsburgh has many). He announced to the crowd two times that they “were just getting warmed up.” Despite these reassurances, after the 2nd mention, they only played one more song before leaving stage (though, they returned for an encore). As with the main set, the encore consisted mainly of songs from Hard Times, and much to my dismay, they brought out the gospel singers to help out on two songs. While I may be making the show out to be a lackluster experience, it was certainly enjoyable and the band was in top form, playing their songs with confidence. Their live performance sounded very much like their recorded material, and they did very little to give their old songs any new life.

As I mentioned earlier, Chuck Ragan opened for Social Distortion, and it is safe to say that it was the most memorable part of the show. Chuck Ragan was one of the singers to the much loved Florida punk band Hot Water Music, though he left the band in 2006 to pursue a solo career. He is one of many punk rock musicians to branch away from punk towards acoustic folk. While the genre shift might make some punk fans a little uneasy, I can safely say that the shift was an extremely natural one, his gravely and earnest vocal delivery fitting perfectly with his songs documenting life’s hardships. He was joined onstage by the fiddle extraordinaire Jon Gaunt and Joe Ginsberg on upright bass, both of which played with a level of intensity and enthusiasm that was not to be matched the rest of the evening. Unfortunately, the large outdoor stage was not the ideal setting to see them. There were far too many people, many of which talked through the entire set, obviously only interested in hearing Social Distortion. Chuck paid no mind, however, putting forth his best for whoever was willing to listen. Afterwards, my brother and I got to talk to him for a short while and thank him for coming to Pittsburgh again (we had seen him earlier as part of the Revival Tour). And much to our satisfaction, he commented on the quality of the bands emblazoned on our t-shirts (Jawbreaker and The Jesus Lizard). If you are unfamiliar with Chuck Ragan, I highly recommend that you give his newest album, Gold County, a spin. 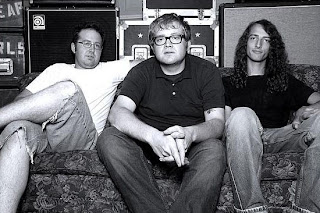 Cheap Girls is a 3 piece band from Lansing, Michigan that play jangly rock songs in the same vein as the Gin Blossoms (meaning that it is excellent, if you are not familiar the Gin Blossoms). Beyond the infectious and catchy guitar driven nature of the songs, if you delve into the lyrics you will notice a great deal of self deprecating humor and cynicism, reminding me of the Gin Blossoms’ old albums (I much preferred when they were singing about failed relationships and smoking cigarettes, as opposed to the trite love songs on their latest album. But, I digress). In addition to the clever lyrics, vocalist Ian Graham’s voice is instantly recognizable, with its unexcited and apathetic tone, which helps to make the songs all the more memorable.

Cheap Girls just recorded a session for Daytrotter, where they played four songs from across their discography (which is admittedly small, at the moment). It is up for free download at Daytrotter. Do yourself a favor and listen to it, and then go see them in concert if they are in your area. They have a number of East Coast dates with Bomb The Music Industry in June.
Posted by Anonymous at 12:10 AM 3 comments: 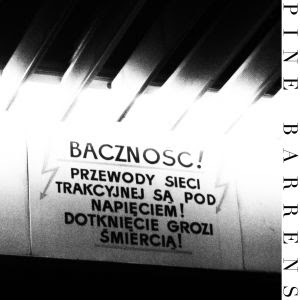 In the past few days, my playlist has been dominated by a 4 track demo from a band called Pine Barrens. They are a hardcore band that hails from Manchester, England and beyond that, about the only other thing I know about them is that their demo is awesome (which is up for free download on their bandcamp page). Their songs are a curious mix of hardcore punk and black metal (while I may be inappropriately using the label, the shrieked/rasped vocals reminded me of black metal) that is both aurally assaulting and surprisingly compelling. Track 4 is the definite highlight of the demo, slowing down the pace a little and adding a second, bellowing vocal track that is hard not to get excited about. The song even has a saxophone solo at the end, but don’t let that fool you, this is aggressive music. Highly recommended. Download it, and if you like what you hear, it was just released on cassette from Big Mountain Recordings. It is limited to 50 copies, so it might not be around long.
Posted by Anonymous at 1:22 PM 1 comment:

The thought of starting a blog documenting my enthusiasm for listening to music has been one that I have been kicking around in my head for a little while now. Though, the idea was continuously shelved, not knowing if I was qualified for the endeavor. Now, I can already hear you crying “it’s a blog for god’s sake, what qualifications do you need?” And while that is certainly a valid point, I still wondered whether I had anything worthwhile to say about the topic. Despite my enthusiasm for listening to music, I am not a musician myself, so I always questioned the relevance of what I might have to say. With my lack of any real musical knowledge, it seemed that any of my critiques would rest solely upon what sounded good to my ear.  As such, any reviews of my own would be limited to stringing together interesting descriptors and adjectives, in an attempt to skirt around the fact that my opinions were not based on what makes a complex or well put together album. How often can you use hackneyed phrases like “buzz-saw guitars” or “brutal” before they stop meaning anything?
It then occurred to me that the blog did not have to focus on reviewing albums. Why not have it be a means to help channel my excitement about music and pass it onto others? There are a plethora of great bands that never reach the ears of most people, no matter how much they deserve to be heard. What better an idea for a blog than to attempt to introduce people to worthwhile bands they otherwise may not have come across?
And I can think of no better band to first mention than the one from which the blog takes its name, Armchair Martian.
Posted by Anonymous at 12:30 AM 2 comments: