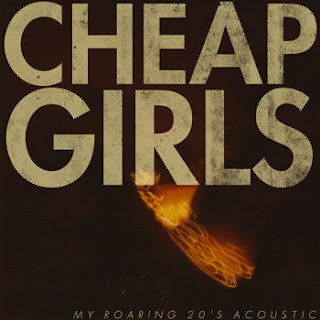 To anyone who has been following this blog, it is no secret that I am extremely fond of Lansing, Michigan’s Cheap Girls. Thanks to their tireless touring schedule, I think I was able to see them 3 times last year!

The band is taking a short break from touring this winter such that vocalist Ian Graham can recover from knee surgery. I hadn't been aware that Ian was struggling with knee pains, which might partially explain why Cheap Girls has never been the most animated band on stage (which I always thought complimented their apathetic and melancholy sound).

As you could probably imagine, knee surgery is not cheap, so to help raise money for the bill, Cheap Girls have released an acoustic version of their 2nd album, My Roaring 20’s. It is up for download on Quote Unquote Records’ website, free of charge. But, if you want to help out Ian, you can give some money for it, all of which will go towards his medical bills.

My Roaring 20’s was my first exposure to the band, and is probably my favorite of their albums. If you have a penchant for self-deprecating alternative rock (like The Lemonheads or the Gin Blossoms), you really need to check out Cheap Girls. This acoustic album is a fantastic place to start.

Help Ian get back on his feet (figuratively and literally), such that we can see more of Cheap Girls this year.